Foot and ankle involve complex joints that help in movement and providing stability and balance to the body. The foot and ankle consist of 26 bones, 33 joints, and many muscles, tendons and ligaments. 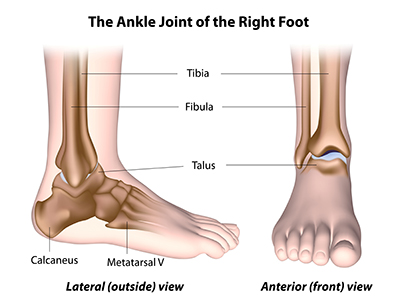 Bones of the ankle

The ankle joint connects the leg with the foot, and is composed of three bones: tibia, fibula and talus. The tibia or shinbone and fibula or calf bone are bones of the lower leg that articulate with the talus or ankle bone, enabling up and down movement of the foot.

Three bony bumps present on the ends of the tibia and fibula form parts of the ankle joint:

Bones of the feet

The foot acts as a single functional unit, but can be divided into three parts: the hindfoot, midfoot and forefoot.

The hindfoot forms the ankle and heel and is made up of the talus bone and calcaneus or heel bone. The heel bone is the largest bone in the foot.

There are 33 joints in the ankle and foot. They include the

The joints of the foot and ankle provide stability and support the weight of the body, helping you to walk or run, and to adapt to uneven ground.

The joint surface of all bones of the ankle and foot are lined by a thin, tough, flexible, and slippery surface called articular cartilage, which acts as a shock absorber and cushion to reduce friction between the bones. The cartilage is lubricated by synovial fluid, which further enables smooth movement of the bones.

Conditions Related To Foot & Ankle are : 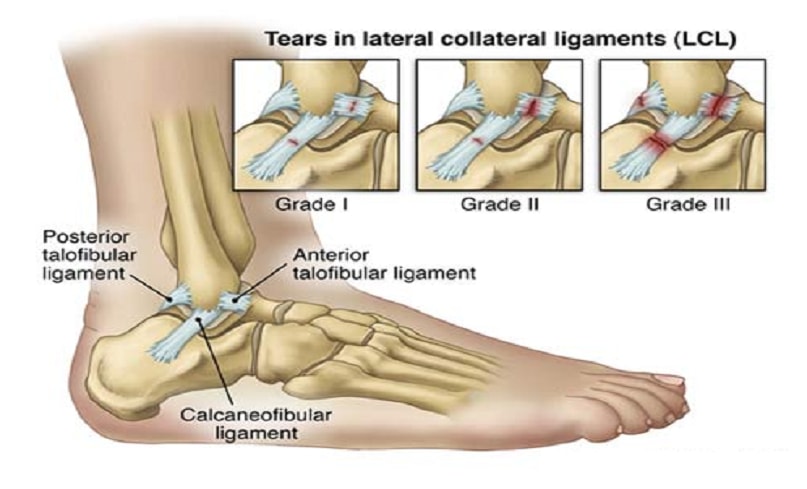 The Anterior Cruciate Ligament, or ACL, is one of the major ligaments of the knee that is in the middle of the knee and runs from the femur…

What is the most common cause of Ankle pain?

Twisting injury (ankle sprain) is the most common cause of ankle pain.

What is Ankle sprain?

It is an injury to one of the ligaments of the ankle joint.

What are the symptoms of ankle sprain?

Pain and swelling around the ankle joint and difficult to weight bear on the affected joint are the main symptoms. Instability of ankle joint in chronic cases.

How do you diagnose Ankle sprain?

What is the treatment for ankle sprain?

In mild injuries(Grade I) rest, cold packs, limb elevation, and analgesics will help. In moderate to severe ankle sprain ideally, the ankle has to be immobilized in a plaster cast for a minimum period of three weeks. In severe cases, MRI is done at the end of three weeks and surgery is done to repair or reconstruct the ligament.

What is the physiotherapy protocol after ankle sprain?

After the plaster is removed ankle movements, strengthening of muscles and proprioception exercises are started gradually over a period of time.